The history of housing segregation, discrimination, and unequal access to housing stems from policies that were aimed to divide the rich and wealthy from the middle working class and the poor. It was racism that played a huge role when it came to U.S. housing policy and still does to this very day.

Habitat Saint Louis builds houses in partnership with those with a demonstrated need who are willing to partner with Habitat and have the ability to pay an affordable mortgage. Habitat Saint Louis does not discriminate based on race, religion, nation of origin, gender, sexual orientation, family status, marital status or any other protected class in accordance with all Equal Opportunity Lending and Fair Housing laws. Everyone deserves a safe place to call home and it’s our mission to provide our partner families with an opportunity of safety and stability.

Below is a reading and watch list regarding racial inequality in housing compiled by Habitat Saint Louis employees. We will keep monitoring this list and will continue to update as needed. Have any reading or video recommendations to add to our list? Please email development@habitatstl.org and let us know.

The Color of Law by Richard Rothstein

“In this groundbreaking history of the modern American metropolis, Richard Rothstein, a leading authority on housing policy, explodes the myth that America’s cities came to be racially divided through de facto segregation—that is, through individual prejudices, income differences, or the actions of private institutions like banks and real estate agencies. Rather, The Color of Law incontrovertibly makes clear that it was de jure segregation—the laws and policy decisions passed by local, state, and federal governments—that actually promoted the discriminatory patterns that continue to this day.” – wwnorton.com | Click here to find The Color of Law at your local library.

In Evicted, Princeton sociologist and MacArthur “Genius” Matthew Desmond follows eight families in Milwaukee as they each struggle to keep a roof over their heads. Hailed as “wrenching and revelatory” (The Nation), “vivid and unsettling” (New York Review of Books), Evicted transforms our understanding of poverty and economic exploitation while providing fresh ideas for solving one of twenty-first-century America’s most devastating problems. Its unforgettable scenes of hope and loss remind us of the centrality of home, without which nothing else is possible. – evictedbook.com | Click here to find Evicted at your local library.

Race for Profit by Keeanga-Yamahtta Taylor

“Race for Profit uncovers how exploitative real estate practices continued well after housing discrimination was banned. The same racist structures and individuals remained intact after redlining’s end, and close relationships between regulators and the industry created incentives to ignore improprieties. Meanwhile, new policies meant to encourage low-income homeownership created new methods to exploit Black homeowners. The federal government guaranteed urban mortgages in an attempt to overcome resistance to lending to Black buyers – as if unprofitability, rather than racism, was the cause of housing segregation. Bankers, investors, and real estate agents took advantage of the perverse incentives, targeting the Black women most likely to fail to keep up their home payments and slip into foreclosure, multiplying their profits. As a result, by the end of the 1970s, the nation’s first programs to encourage Black homeownership ended with tens of thousands of foreclosures in Black communities across the country. The push to uplift Black homeownership had descended into a goldmine for realtors and mortgage lenders, and a ready-made cudgel for the champions of deregulation to wield against government intervention of any kind.” – UNC Press | Click here to find Race for Profit at your local library.

“Mapping Decline examines the causes and consequences of St. Louis’s urban crisis. It traces the complicity of private real estate restrictions, local planning and zoning, and federal housing policies in the “white flight” of people and wealth from the central city. And it traces the inadequacy—and often sheer folly—of a generation of urban renewal, in which even programs and resources aimed at eradicating blight in the city ended up encouraging flight to the suburbs. The urban crisis, as this study of St. Louis makes clear, is not just a consequence of economic and demographic change; it is also the most profound political failure of our recent history.” – upenn.edu | Click here to find Mapping Decline at your local library.

“Marking 50 years since the passage of the Fair Housing and Civil Rights Acts, this collection both builds on and departs from two generations of scholarship on urban development and inequality. The volume’s contributors provide historical context for patterns of segregation in the United States and present arguments for bold new policy actions ranging from the local to the national. Evidence for the negative effects of segregation and concentrated poverty in America’s cities now exists in abundance. Poor and underrepresented communities in segregated urban housing markets suffer diminished outcomes in education, economic mobility, political participation, and physical and psychological health. Many of the aggravating factors underlying this inequity have persisted or even grown worse in recent decades. Yet the level of energy and attention devoted to them by local and national policymakers has ebbed significantly from the levels that inspired the landmark civil rights legislation of the 1960s. Facing Segregation refocuses attention on achievable solutions by providing not just an overview of this timely subject but a roadmap forward, as the twenty-first century assesses the successes and failures of the housing policies inherited from the twentieth. Instead of introducing new theories or empirical data sets describing the urban landscape, Metzger and Webber have gathered the field’s first collection of prescriptions for what ought to be done.” – Washington University in St. Louis | Click here to find Facing Segregation at your local library.

Segregation by Design: Local Politics and Inequality in American Cities by Jessica Trounstine

“Segregation by Design” draws on more than 100 years of quantitative and qualitative data from thousands of American cities to explore how local governments generate race and class segregation. Starting in the early twentieth century, cities have used their power of land use control to determine the location and availability of housing, amenities (such as parks), and negative land uses (such as garbage dumps). The result has been segregation – first within cities and more recently between them. Documenting changing patterns of segregation and their political mechanisms, Trounstine argues that city governments have pursued these policies to enhance the wealth and resources of white property owners at the expense of people of color and the poor. Contrary to leading theories of urban politics, local democracy has not functioned to represent all residents. The result is unequal access to fundamental local services – from schools to safe neighborhoods, to clean water. – cambridge.org | Click here to find Segregation by Design at your local library.

Neal Gorenflo of Shareable took the time to breakdown the history of housing policies in America which was rooted in racist strategies. Note, some of Gorenflo’s study does use Wikipedia to share details regarding segregation in our country, but also consults Richard Rothstein’s “The Color of Law” and Jessica Trounstein’s “Segregation by Design.” Gorenflo says tackling the history of housing policy is no easy feat; the surprisingly uncoordinated action of multiple levels of government impacted developments not always affiliated with housing. Interstate highway systems and Fannie Mae were key enablers for suburban sprawl creating a divide between communities. You can download Shareable’s “How Racism Shaped the Housing Crisis & What We Can Do About It” as an eBook for free by clicking here.

A 115-page community-driven report on segregation and housing in St. Louis, created in partnership with ArchCity Defenders, Ascend STL Inc., Metropolitan St. Louis Equal Housing and Opportunity Council (EHOC), Empower Missouri, For the Sake of All, Invest STL, and Team TIF. The report presents an extensive history of our region’s use of segregation housing policies and practices and concludes with 11 key recommendations to dismantle our significant divides. You can read the entire report by clicking here.

Segregated by Design (narrated by Richard Rothstein, who wrote the Color of Law)

‘Segregated by Design’ examines the forgotten history of how our federal, state, and local governments unconstitutionally segregated every major metropolitan area in America through law and policy.

Prejudice can be birthed from a lack of understanding of the historically accurate details of the past. Without being aware of the unconstitutional residential policies the United States government enacted during the middle of the twentieth century, one might have a negative view today of neighborhoods where African Americans live or even of African Americans themselves.”  – segregatedbydesign.com

“How did Clayton become Clayton? Emma Riley, a proud graduate of Clayton High School and a recent graduate of Washington University, never thought to ask that question until the unrest in Ferguson exposed the disparities in education, housing, and resources in north St. Louis County.

“I asked myself, ‘What about Clayton?'” said Riley, who studied communication design in the Sam Fox School and American culture studies in Arts & Sciences. She now works at the University’s Gephardt Institute for Civic and Community Engagement. “How was it created? Who made those decisions? And how do decisions of the past affect the future?”

Riley probes those questions in Displaced & Erased, a short documentary that explores how a thriving African American community was zoned out of existence to expand Clayton’s central business district. Here, Riley discusses the film’s inspiration and how it has changed her perception of Clayton.” -Sam Fox School at Washington University in St. Louis

The House We Live In – by California Newsreel

“The House We Live In” asks, if race is not biology, what is it? This episode uncovers how race resides not in nature but in politics, economics, and culture. It reveals how our social institutions “make” race by disproportionately channeling resources, power, status and wealth to white people, especially in housing. – via YouTube

Have any reading or video recommendations to add to our list? Please join the conversation and email us at development@habitatstl.org to let us know. 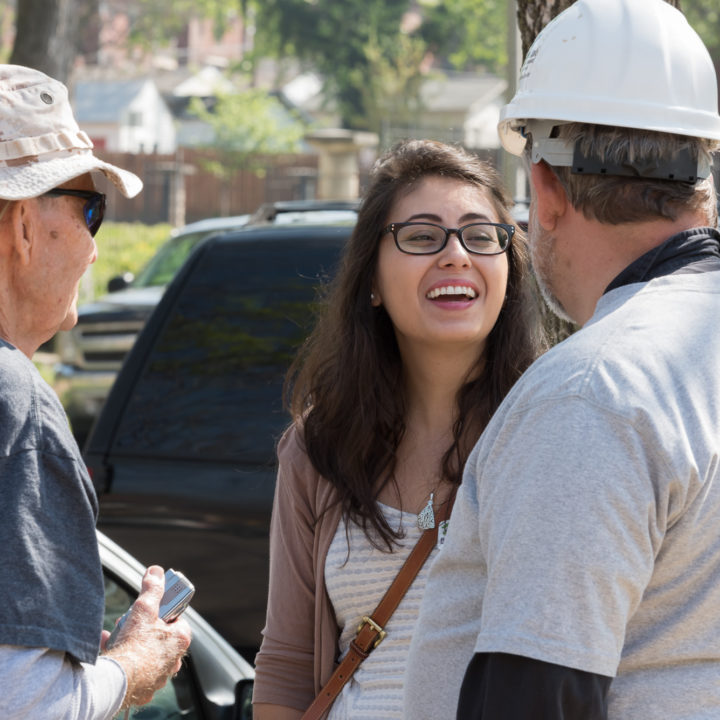